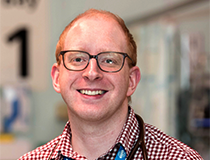 Want to know more about how the Notts NHS App can help you?

Dr Jeremy Lewis is an Acute Medicine Consultant at Nottingham University Hospitals.  He has kindly shared the positive benefits he has experienced of using the Notts NHS App as a patient for ordering his repeat prescription. Jeremy encourages you, his colleagues, to download it today!

When going on holiday, an essential item that is packed is medication, which enables you to be able to continue functioning as normal until the unthinkable happens, you run out of your repeat prescription.

This was the case for Dr Jeremy Lewis, an Acute Medicine Consultant at Nottingham University Hospitals (NUH), who was unable to collect his inhaler prescription before going on holiday and unfortunately ran out whilst away in Norfolk.

As a citizen of Nottingham and Nottinghamshire, Dr Lewis has access to the Notts NHS App, which is the NHS App with the enhanced functionality (for things like secure messages, questionnaires, symptom tracking and shared care plans) provided by Patients Know Best (PKB)

Dr Lewis was aware that he was able to use the Notts NHS App to change his nominated pharmacy to one closer to his holiday location but was unable to order his repeat as he had already submitted an order before his departure.

Dr Lewis was able to contact his practice by submitting an online message to his using PKB through the NHS App. Dr Lewis stated “the process to send a message was quick. I received a message from the admin team at the practice saying this would be passed on to the pharmacist. This was sorted within a matter of hours.”

Whilst waiting to hear back from the GP practice, Dr Lewis was able to change his nominated pharmacy to one more local and advised he was able to pick up his prescription from the chosen pharmacy the next day.

Dr Lewis went on to mention that without this service and capability, he would not have been able to have his prescription whilst away.

Dr Lewis was asked whether he thought the Notts NHS App would be able to benefit other clinical colleagues, he replied:

“I have been able to set my nominated pharmacy for the Trust pharmacy at NUH. This has made it easier to pick up my prescriptions from the pharmacy because I am already there.”

Dr Lewis provided further comments on the use of messaging to contact his practice stating:

“Messaging was better and easier; I didn’t have to wait on hold to get through to my practice. It is quite convenient this app is available”